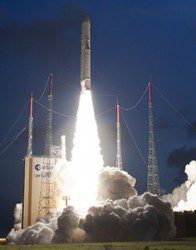 EuroConsult expects the number of satellite launches to double in the next decade.

Paris-based EuroConsult estimates the market for the manufacture and launch of the satellites will be worth some $196 billion (â‚¬136 billion) worldwide, of which commercial satellites represent $50 billion, with the vast majority of the remainder taken up by government-based projects.

The information is revealed in the 14th edition of EuroConsult's Satellites to be Built & Launched.

The market is driven primarily by established operators' investment cycles for replacing in-orbit capacity (representing 70 percent of orders in the past), and to a lesser degree by new systems for newer commercial companies and governments.

EuroConsult predicts commercial satellite services outside the geostationary orbit will get a boost during the next decade with a total of 165 satellites to be built and launched into medium and low Earth orbits (MEO and LEO). Three-quarters of these will be communications satellites to replace the first-generation LEO satellites (operated by Iridium, Globalstar and Orbcomm) and for O3b's first-generation system, which will be the first commercial constellation launched into MEO.