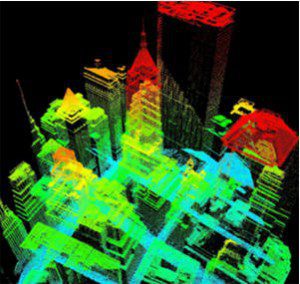 Sustainable CUNY, via its partnership with New York City, is using light detection and ranging (LiDAR) data to create the Solar Map. The data are being used to build a detailed model of the city, including building rooftops, footprints and tree shading. This model is the basis for estimating the amount of solar energy that falls on each square meter of the five boroughs and determining the solar energy potential for every building citywide. The Solar Map is being developed by the Center for Advanced Research of Spatial Information (CARSI) at CUNY's Hunter College with data collected in April of 2010 by Sanborn Map Company.

As the nation’s largest urban university, CUNY plays a transformational role in New York City's sustainable future with an educational footprint that spans 23 academic institutions and more than half a million students, faculty and staff. CUNY is dedicated to integrating sustainability into the university and the surrounding metropolitan area through its curriculum, policy work, research, retrofitting, capital projects, workforce development and economic development activities.