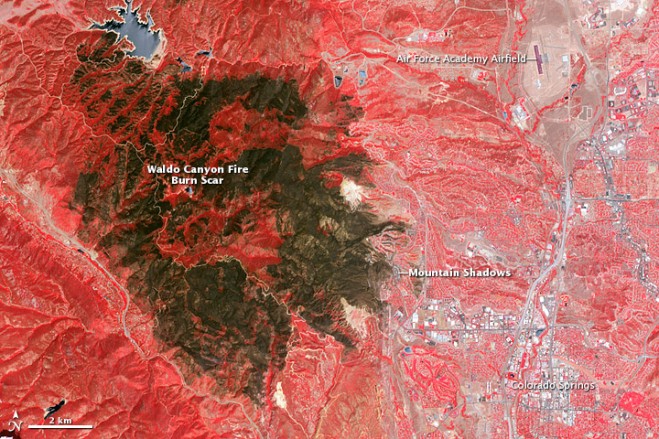 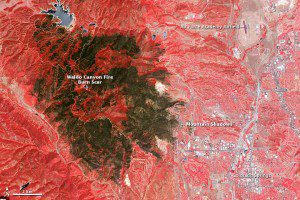 NASA’s Terra satellite acquired this view of the burn scar on July 4, 2012, when the fire was still burning but was 90 percent contained. Vegetation-covered land is red in the false-color image, which includes both visible and infrared light. Patches of unburned forest are bright red, in contrast with areas where flecks of light brown indicate some burning. The darkest brown areas are the most severely burned.

Thousands of affected Colorado residents are holding their collective breath as the summer’s first thunderstorms move in, creating the threat of dangerous flash floods in massive burn areas. Flood warnings were first issued on July 6 as thunderstorms began to form over Colorado’s High Park and Waldo Canyon fire areas.

According to weather forecasters, just a small amount of rainfall on a burn scar can lead to flash flooding. Water that is normally absorbed by vegetation runs off almost instantly. This causes creeks and drainage areas to flood at a much faster rate than normal.

The Waldo Canyon fire was first reported on June 23, 2012, burning in Pike National Forest, three miles (5 kilometers) west of Colorado Springs. Fueled by extremely dry conditions and strong winds, it had burned 18,247 acres (74 square kilometers) by July 5. The blaze severely damaged or destroyed 346 homes, making it the most destructive fire in Colorado history.

Mountain Shadows, a neighborhood northwest of the Colorado Springs city center, experienced some of the most severe damage. According to an analysis conducted by the Denver Post, the combined value of the homes that burned to the ground in the neighborhood was at least $110 million.