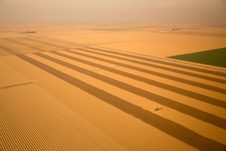 For several months, California has been in a state of “exceptional drought.” The state’s usually verdant Central Valley produces one-sixth of U.S. crops.

SMAP uses two microwave instruments to monitor the top 2 inches (5 centimeters) of soil on Earth’s surface. Together, the instruments create soil moisture estimates with a resolution of about 6 miles (9 kilometers), mapping the entire globe every two or three days. Although this resolution cannot show how soil moisture might vary within a single field, it will give the most detailed maps yet made.

“Based on snowpack and precipitation data in California, by March we had a pretty good idea that by summer we’d be in a severe agricultural drought,” added Melton. “But irrigation in parts of India, the Middle East and other regions relies heavily on the pumping of groundwater during some or all of the year.”

Underground water resources are hard to estimate, so farmers who rely on groundwater have fewer indicators of approaching shortfalls than those whose irrigation comes partially from rain or snowmelt. For these parts of the world where farmers have little data available to help them understand current conditions, SMAP’s measurements could fill a significant void.