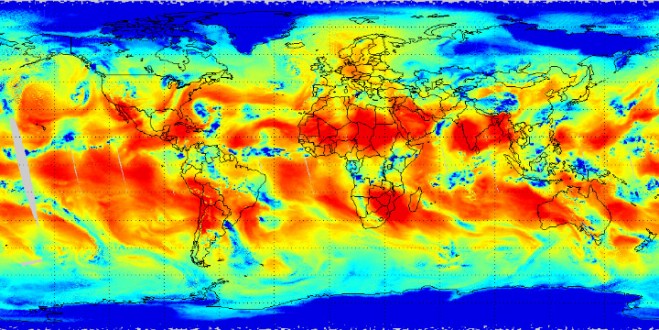 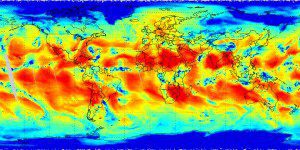 Tropical Storm Sean is visible as a blue patch in the Atlantic Ocean off the southeastern United States in this new NASA NPP satellite image.

Eleven days after its launch into Earth orbit, NASA’s new NPP satellite sent back its first science data onNov. 8, 2011, part of a series of instrument startups and checkouts that will take place before the satellite goes into full operational mode.

This image from the Advanced Technology Microwave Sounder (ATMS) depicts the location and abundance of water vapor in the lower atmosphere, from the surface to 5 kilometers altitude. Reds depict areas with less water vapor, while blues represent abundant water in all phases (vapor, clouds and precipitation) in low and middle latitudes. In the polar regions, blue depicts surface snow and ice. Note that Tropical Storm Sean is visible as a blue patch in the Atlantic Ocean off the southeastern United States.

ATMSreceives 22 channels of radio waves from 23 to 183 gigahertz (GHz). Five water vapor channels, combined with other temperature sounding channels, help scientists make a vertical profile of water vapor in the atmosphere. The temperature measurement in kelvins (K) is not a physical temperature, but instead a measurement of the intensity of the microwave radiation.

“Water vapor is a fuel for weather formation and is the source for precipitation,” said Fuzhong Weng, chief of the Satellite Climatology and Meteorology Division at the National Oceanic and Atmospheric Administration (NOAA) Center for Satellite Applications and Research. “Water vapor distribution in space and time is a critical measurement for improving global weather forecasts. With detailed information in the vertical direction, forecasters can better identify the transport of water vapor associated with jet streams, which can fuel severe weather events. Computer forecast models can ingest the data through the analysis system and produce much better forecasts.”

NPP serves as a bridge mission between NASA’s Earth Observing System (EOS) of satellites and the next-generation Joint Polar Satellite System, a NOAA program that will also collect weather and climate data.