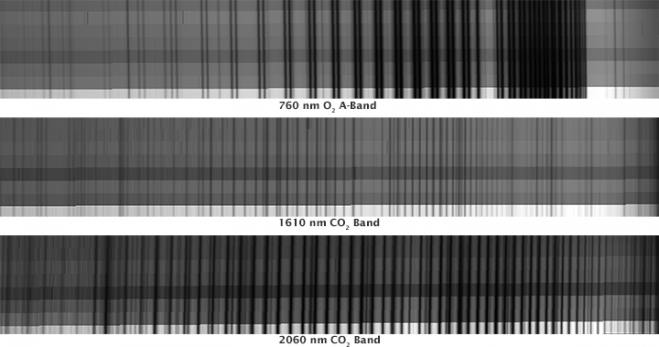 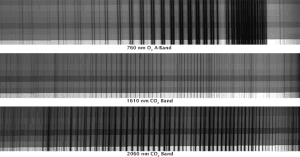 These plots show some of the first data taken by OCO-2 as it flew over Papua-New Guinea on Aug. 6, 2014. Each plot shows three different spectra, or wavelengths, observed by the satellite’s spectrometers. When displayed as an image, the spectra appear like bar codes. The dark lines indicate absorption by molecular oxygen or carbon dioxide.

Just a little more than a month after it was launched, the Orbiting Carbon Observatory-2 (OCO-2) satellite has been maneuvered into its final orbit and has produced its first science data.

As NASA’s first spacecraft dedicated to studying atmospheric carbon dioxide, OCO-2 will produce the most detailed picture to date of the manmade and natural sources of carbon dioxide as well as their natural “sinks”—places on Earth’s surface where carbon dioxide is removed from the atmosphere. The satellite will study how these sources and sinks are distributed around the globe and how they change over time.