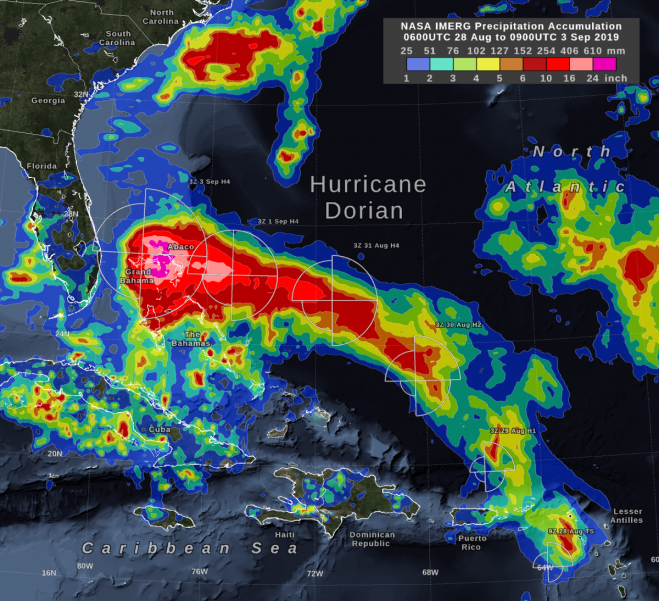 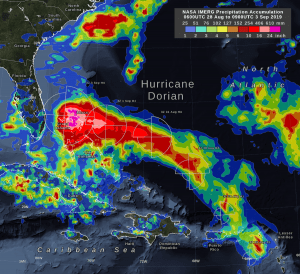 In the early hours of Sept. 3, 2019, Hurricane Dorian had been stationary over the island of Grand Bahama for 18 hours, most of the time as a category 5 hurricane. Storm-total rain accumulation over parts of Grand Bahama and Abaco Islands exceeded 24 inches, according to NASA satellite-based estimates.

These rain estimates come from the NASA IMERG algorithm, which combines observations from a fleet of satellites, in near-real-time, to provide global estimates of precipitation every 30 minutes. The storm-total rainfall at a particular location varies with the forward speed of the hurricane, with the size of the hurricane’s wind field, and with how vigorous the updrafts are inside the hurricane’s eyewall.

IMERG, or the Integrated Multi-satellitE Retrievals for GPM (IMERG) data product, is generated by NASA’s Precipitation Processing System every half hour with a 6-hour latency from the time of data acquisition. It’s produced using data from the satellites in the GPM or Global Precipitation Measurement mission constellation of satellites, and is calibrated with measurements from the GPM Core Observatory as well as rain gauge networks around the world.