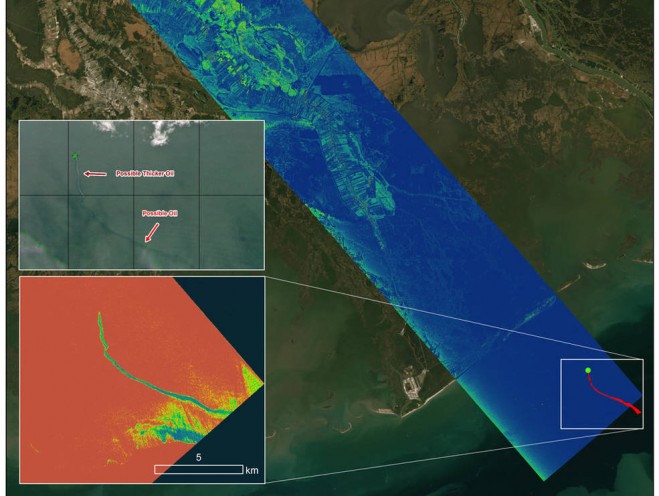 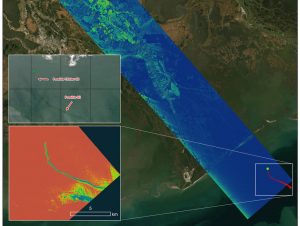 Charged with studying the Mississippi River Delta, NASA’s Delta-X project was gearing up to collect data on Louisiana’s coastal wetlands when Hurricane Ida barreled ashore in late August 2021. The storm—a high-end Category 4 when it made landfall near Port Fourchon, La., on Aug. 29, 2021—damaged buildings and infrastructure alike, resulting in power outages, flooding and oil slicks in the Gulf of Mexico.

The National Oceanic and Atmospheric Administration (NOAA) regularly monitors U.S. coastal waters for potential spills and noticed some slicks that appeared just off the coast after the hurricane. They were able to use Delta-X radar data to corroborate the presence and location of these oil slicks.

Oil tends to smooth out the bumps on the ocean’s surface, which results in a distinct radar signal that the Delta-X mission was able to pick out of their data. In the false-color inset graphic above, the oil appears as a green trail, while the surrounding seawater appears orange. NOAA used this information to corroborate other data they had about oil slicks in the area (satellite image in the second inset picture). In the larger image, the blue-green swath crossing from the Gulf of Mexico over the Louisiana coast denotes the flight path of the radar instrument on Sept. 1, just before 11:30 a.m. CDT. Delta-X added flight paths to their planned schedule—with the support of NASA’s Applied Science Disaster Program—in order to collect information over the Gulf in areas of interest to NOAA.