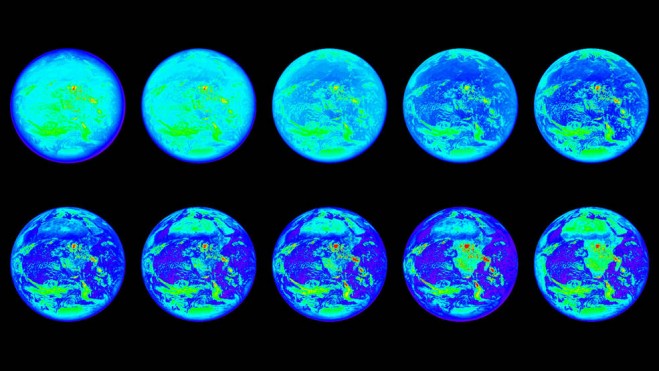 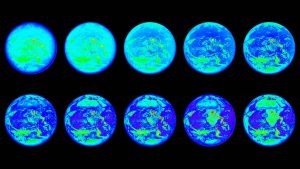 These images show the sunlit side of Earth in 10 different wavelengths of light that fall within the infrared, visible and ultraviolet ranges; the images are representational-color, because not all these wavelengths are visible to the human eye. Each wavelength highlights different features of the planet—for example, the continent of Africa is visible in the lower right image, but is nearly invisible in the upper left image. These observations were obtained by NASA’s EPIC instrument onboard the NOAA DSCOVR satellite. (Credit: NASA/NOAA)

The study of exoplanets—planets that lie outside our solar system—could help scientists answer big questions about our place in the universe, and whether life exists beyond Earth. But these distant worlds are extremely faint and difficult to image directly. A new study uses Earth as a stand-in for an exoplanet, and shows that even with very little light—as little as one pixel—it’s still possible to measure key characteristics of distant worlds.

The new study uses data from NASA’s Earth Polychromatic Imaging Camera (EPIC) instrument, which is onboard the National Oceanic and Atmospheric Administration (NOAA) Deep Space Climate Observatory (DSCOVR) satellite. DSCOVR goes around the sun at Lagrange point 1, a specific orbit that provides EPIC with a constant view of our home planet’s sunlit surface.

The EPIC instrument captures reflected light from Earth in 10 different wavelengths, so each time EPIC “takes a picture” of Earth, it actually captures 10 images. The new study averages each image into a single brightness value, or the equivalent of one “single-pixel” image for each wavelength. A single, one-pixel snapshot of the planet would provide very little information about the surface. But in the new study, the authors analyzed a dataset containing single-pixel images taken multiple times per day, in 10 wavelengths, over an extended period. Despite the fact that the entire planet had been reduced to a single point of light, the authors were able to identify water clouds in the atmosphere and measure the planet’s rotation rate (the length of its day). The authors say the study, in the June 27 issue of the Astrophysical Journal, demonstrates that the same information could be derived from single-pixel observations of exoplanets.