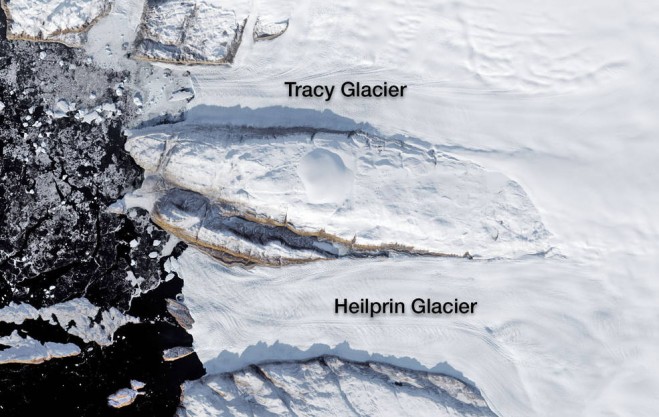 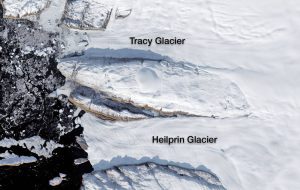 Tracy and Heilprin glaciers in northwest Greenland. The two glaciers flow into a fjord that appears black in this image. (Credit: NASA)

Using ocean data from NASA's Oceans Melting Greenland (OMG) campaign, the study documents a plume of warm water flowing up Tracy's underwater face and a much colder plume in front of Heilprin. Scientists have assumed plumes like these exist for glaciers all around Greenland, but this is the first time their effects have been measured.

The finding highlights the critical role of oceans in glacial ice loss and their importance for understanding future sea-level rise. A paper on the research was published June 21 in the journal Oceanography.

Tracy and Heilprin were first observed by explorers in 1892 and have been measured sporadically ever since. Even though the adjoining glaciers experience the same weather and ocean conditions, Heilprin has retreated upstream less than 2.5 miles (4 kilometers) in 125 years, while Tracy has retreated more than 9.5 miles (15 kilometers). That means Tracy is losing ice almost four times faster than its next-door neighbor.