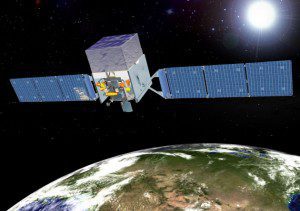 On March 29, 2012, the science team for NASA's Fermi Gamma-ray Space Telescope (above) learned that a defunct Cold War spy satellite would pass too close for comfort on April 4, 2012. The two spacecraft were expected to occupy the same point in space within 30 milliseconds of each other, which meant Fermi had to get out of the way.

NASA scientists don’t often learn that one of their spacecraft is at risk of crashing into another satellite. But when Julie McEnery, the project scientist for NASA’s Fermi Gamma-ray Space Telescope, checked her e-mail on March 29, 2012, she found herself facing this precise situation.

While Fermi is in fine shape today, continuing its mission to map the highest-energy light in the universe, the story of how it sidestepped a potential disaster offers a glimpse at an underappreciated aspect of managing a space mission: orbital traffic control.

As McEnery worked through her inbox, an automatically generated report arrived from NASA’s Robotic Conjunction Assessment Risk Analysis team based at NASA’s Goddard Space Flight Center in Greenbelt, Md. Upon scanning the document, she discovered that Fermi was just one week away from an unusually close encounter with Cosmos 1805, a defunct spy satellite dating back to the Cold War. The two objects, speeding around Earth at thousands of miles an hour in nearly perpendicular orbits, were expected to miss each other by a mere 700 feet on April 4, 2012.

“My immediate reaction was, ‘Whoa, this is different from anything we’ve seen before!'” McEnery recalled.

Although the forecast indicated a close call, satellite operators have learned the hard way that they can’t be too careful. The uncertainties in predicting spacecraft positions a week into the future can be much larger than the distances forecast for their closest approach. And with a speed relative to Fermi of 27,000 mph, a direct hit by the 3,100-pound Cosmos 1805 would release as much energy as two and a half tons of high explosives, destroying both spacecraft.