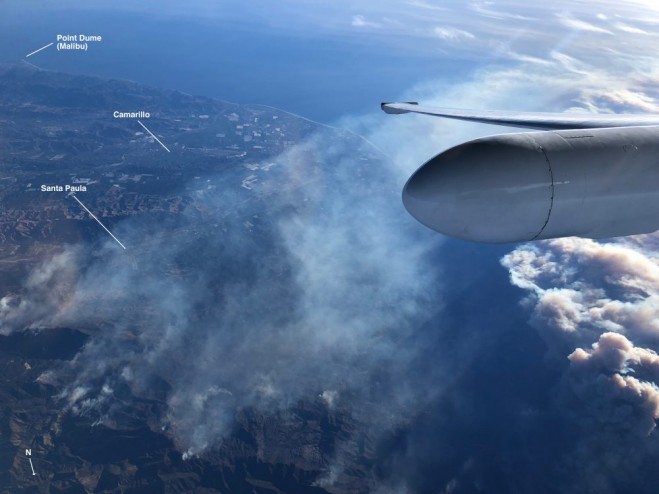 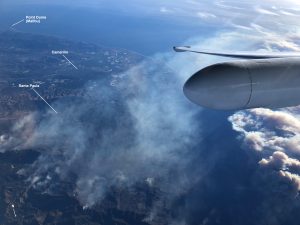 This image offers landmark references to a photo captured from NASA’s ER-2 high-altitude science platform when it flew over the Thomas Fire in Ventura County on Dec. 7, 2017. (Credit: NASA/Tim Williams)

A team of NASA scientists is using a high-altitude aircraft and a sophisticated imaging spectrometer to study environmental impacts caused by the devastating Southern California wildfires.

NASA’s ER-2, based at Armstrong Flight Research Center in Palmdale, Calif., flies as high as 70,000 feet (21,300 meters), almost twice as high as a commercial airliner. NASA uses the unique perspective of the ER-2 for science research missions over much of the world. This month, the aircraft has been flying locally over California, testing early versions of science instruments that may one day be launched into space onboard a satellite to observe Earth.

During these engineering test flights, the aircraft carried several science instruments on board, including the Airborne Visible/Infrared Imaging Spectrometer (AVIRIS), which can peer through smoke and dust to see information about the ground surface below. This includes observations of trees and other foliage that ends up being fuel for wildfires.

Scientists can use the instrument to fly over regions before a fire to get a base measurement of a certain area, and then fly over the same area again after a fire, then compare the before-and-after images to determine the fire’s severity.

“The vision is that these types of measurements could be available from space in the next decade,” said JPL’s Rob Green, principal investigator of the AVIRIS instrument. “The resulting information would then be used to develop fuel maps in advance that could be used to make better predictions about where you could mitigate risk by clearing brush and trees.”