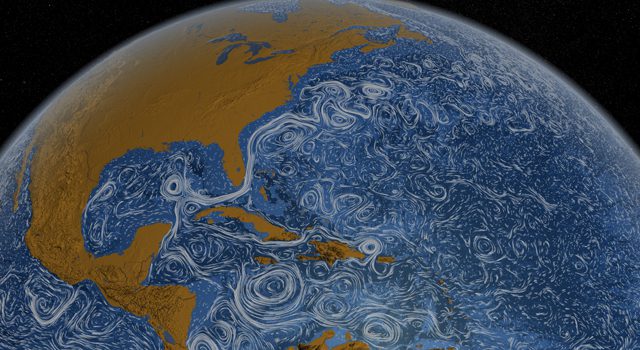 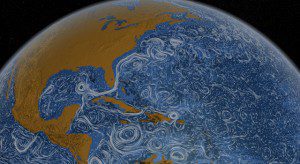 A visualization of ocean surface currents from June 2005 to December 2007 from NASA satellites shows how bigger currents like the Gulf Stream in the Atlantic Ocean and the Kuroshio in the Pacific carry warm waters across thousands of miles at speeds greater than 4 mph.

The swirling flows of Earth’s perpetually changing ocean come to life in a new NASA scientific visualization that captures the movement of tens of thousands of ocean currents. Developed by NASA’s Goddard Space Flight Center in Greenbelt, Md., the visualization is based on a synthesis of a numerical model with observational data. The model was created under a NASA project called Estimating the Circulation and Climate of the Ocean (ECCO).

The visualization covers the period from June 2005 to December 2007.  ECCO model-data syntheses are being used to quantify the ocean’s role in the global carbon cycle; to understand the recent evolution of the polar oceans; to monitor time-evolving heat, water, and chemical exchanges within and between different components of the Earth system; and for many other science applications.