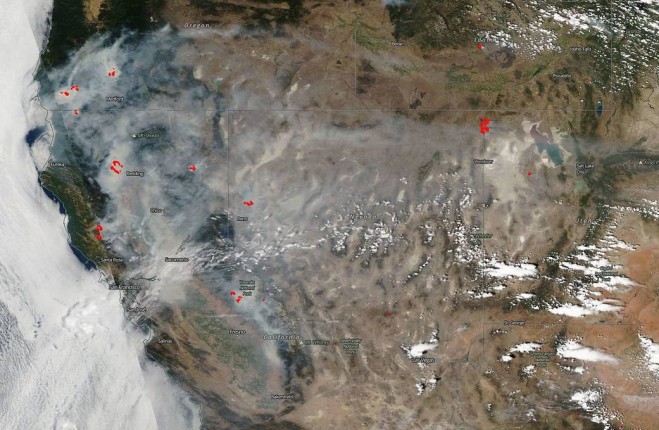 On July 29, 2018, NASA’s Aqua satellite captured this natural-color image of the fires in California and the resultant smoke that has shrouded the state and swept eastward as far as Salt Lake City and still moving. Dangerous and deadly fires have broken out across the state, including the Carr fire inferno and the long-standing Ferguson fire near Yosemite National Park as well as the Mendocino Complex north of Santa Rosa.

The Carr fire located near Redding, Calif., has exploded over the week from its inception; now at 98,724 acres and 20% contained. Six people have died as a result of this deadly fire, which has also destroyed 723 residences, three commercial buildings and 240 outbuildings—with more than 5,000 more structures in danger. More than 3,300 firefighters are engaged in this effort, and mandatory evacuations can be found at the Shasta County Sheriff’s website.

Weather forecasts are not favorable for fighting this or any of the other fires in California. The hot, dry weather that contributed to the deadly California firestorm shows no sign of letting up into the first part of August.