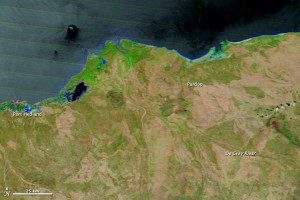 On Feb. 21, the De Gray River was barely visible in imagery collected by NASA's Terra satellite.

Tropical Cyclone Rusty made landfall in northwestern Australia in late February 2013, prompting the Australian Bureau of Meteorology to issue a flood warning for the catchment of the De Gray River. 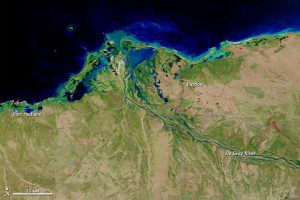 On March 4, the river's channels showed up clearly. High water also pooled near the coast between Port Hedland and Pardoo.

Both images use a combination of visible and infrared light to better distinguish between water and land. Water varies in color from pale blue-green to navy and darker shades of blue”lighter water carries sediment, while darker water is relatively sediment-free or significantly deeper. Vegetation is bright green, and bare ground is earth-toned. Clouds are nearly white and cast shadows.