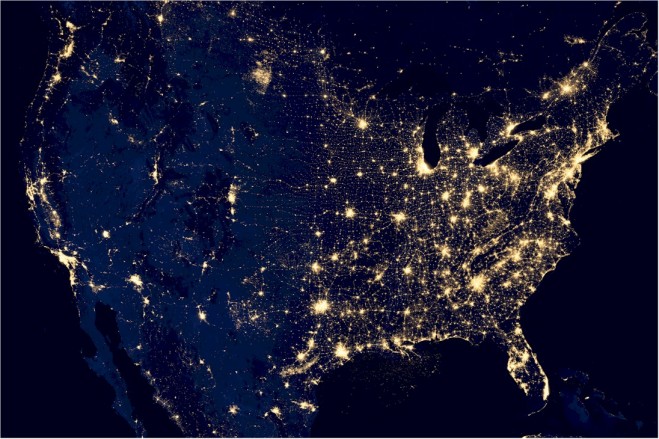 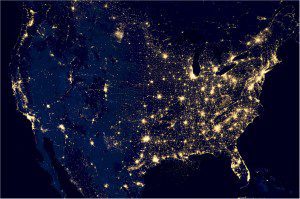 This image of the continental United States at night is a composite assembled from data acquired by the Suomi NPP satellite in April 2012 and October 2012. The satellite’s VIIRS day-night band detects light in a range of wavelengths from green to near-infrared and uses filtering techniques to observe dim signals such as city lights, gas flares, auroras, wildfires and reflected moonlight. Click on image to enlarge.

Many satellites are equipped to look at Earth during the day, when they can observe our planet fully illuminated by the sun. With a new sensor on the NASA-NOAA Suomi National Polar-orbiting Partnership (NPP) satellite launched last year, scientists now can observe Earth’s atmosphere and surface during nighttime hours.

The new sensor, the day-night band of the Visible Infrared Imaging Radiometer Suite (VIIRS), is sensitive enough to detect the nocturnal glow produced by Earth’s atmosphere and the light from a single ship in the sea. Satellites in the U.S. Defense Meteorological Satellite Program have been making observations with low-light sensors for 40 years, but the VIIRS day-night band can better detect and resolve Earth’s night lights.

The new, higher-resolution composite image of Earth at night was released at a news conference at the American Geophysical Union meeting in San Francisco. This and other VIIRS day-night band images are providing researchers with valuable data for a wide variety of previously unseen or poorly seen events.

See more night images of our planet and view a cool NASA video!