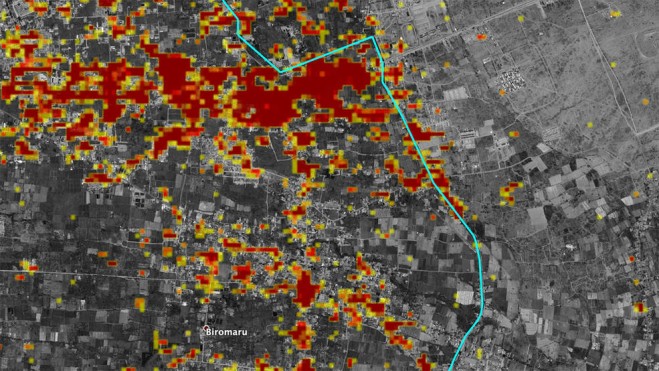 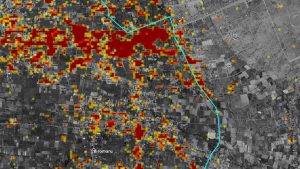 JPL's ARIA team produced this Damage Proxy Map of Palu after the 2018 earthquake. The aqueduct is marked in blue; red and yellow pixels show likely damage. The terrain slopes uphill from left to right, with major damage below the aqueduct and little above it. (Credit: NASA/JPL-Caltech/JAXA)

In the deadly 2018 earthquake in the Indonesian city of Palu, intense shaking changed solid ground into a landslide of flowing mud, multiplying the death toll and economic impact. A new paper shows that this disastrous effect was triggered by a previously unknown risk factor: flooding rice fields for farming.

Soil liquefaction, which causes this kind of landslide, occurs when the shaking from a large earthquake rips through moist, loose soil, overpowering the friction that normally holds dirt particles together. The soil loses its structural integrity and begins to flow like a liquid. Buildings fall as their support washes away. Heavy objects like cars sink into the muck, while buried water and sewer pipes rise to the surface.

In Palu, although early reporting blamed most of the estimated 2,000 fatalities on a tsunami, surveys soon showed that soil-liquefaction landslides caused at least as much damage as the ocean waves did. That puzzled researchers. Soil liquefaction usually occurs in flat landscapes with wet, sandy or silty ground, such as coastal plains. Researchers had thought flat terrain was a prerequisite because the water table—the distance below ground where the soil becomes saturated with water—must be shallow, and that's rare on a hillside. Palu has sandy soil, but it's in a gently sloping valley that appeared to pose little risk.