February 27, 2018
NASA Looks at Midwest Rain and Melting Snow that Contributed to Flooding 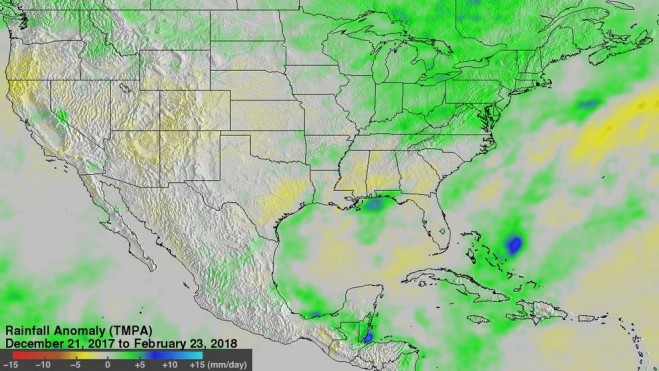 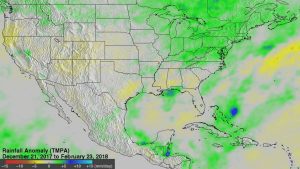 Data collected from Dec. 21, 2017, to Feb. 23, 2018, in this NASA TMPA rainfall anomaly analysis indicated that parts of the upper Midwest have had 5 millimeters (0.2 inches) of precipitation per day above normal so far this winter. (Credit: NASA/Hal Pierce)

Much of the U.S. Midwest received above normal precipitation this winter, and a NASA rainfall analysis provided a look at the precipitation that contributed to current flooding.

Recent heavy rainfall and melting snow has caused flooding from eastern Texas to Michigan. Major flooding is expected along the Ohio River in Illinois and Kentucky. On Feb. 23, 2018, the National Weather Service noted that several locations along the Ohio River near Louisville were under flood warnings. Parts of Arkansas and Indiana also are preparing for major flooding.

At NASA’s Goddard Space Flight Center, a rainfall anomaly analysis was made by comparing rainfall data compiled during the 12-year period from 2001 to 2012 to “near real-time” Multi-satellite Precipitation Analysis (TMPA-RT 3B42RT) data collected from Dec. 21, 2017 to Feb. 23, 2018.

The National Weather Service noted on Feb. 23, “The heavy rainfall that began last week and continued over the weekend has brought widespread flooding to the central and southern U.S., from the Gulf Coast to the Great Lakes. Numerous river systems will remain in flood stage this week. Another round of rainfall is forecast across the Lower/Mid-Miss. and Tenn. River Valleys Tuesday into Wednesday, which will exacerbate the ongoing flood threat.”