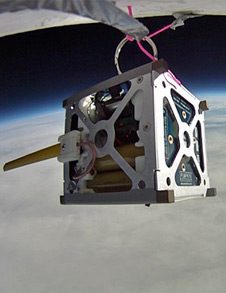 A NASA PhoneSat is shown during a high-altitude balloon test.

The trio of “PhoneSats” is operating in orbit, and may prove to be the least-expensive satellites ever flown in space. The goal of NASA’s PhoneSat mission is to determine whether a consumer-grade smartphone can be used as the main flight avionics of a capable, yet inexpensive, satellite.

Transmissions from all three PhoneSats have been received at multiple ground stations on Earth, indicating they are operating normally. The PhoneSat team at the Ames Research Center in Moffett Field, Calif., will continue to monitor the satellites in the coming days. The satellites are expected to remain in orbit for as long as two weeks.

“It’s always great to see a space technology mission make it to orbit—the high frontier is the ultimate testing ground for new and innovative space technologies of the future,” said Michael Gazarik, NASA’s associate administrator for space technology in Washington. “Smartphones offer a wealth of potential capabilities for flying small, low-cost, powerful satellites for atmospheric or Earth science, communications or other space-born applications. They also may open space to a whole new generation of commercial, academic and citizen-space users.”