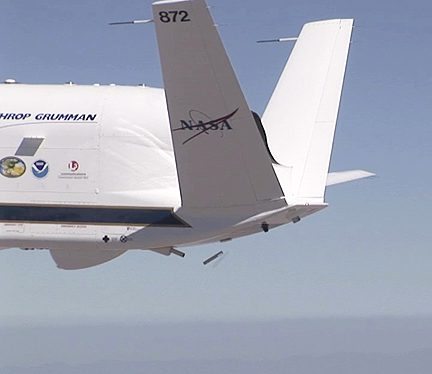 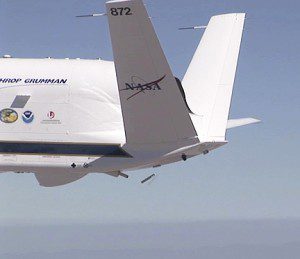 A NASA Global Hawk releases a dropsonde, a device that measures storm conditions as it falls to the ground.

In August 2013, NASA will begin flying two Global Hawk unmanned aircraft in an intensive campaign to gain insight into the dynamics of hurricane intensity change in the Atlantic Ocean basin.

The second HS3 aircraft is equipped with sensors to observe atmospheric conditions in the immediate vicinity of the storm. The Environmental Payload on that aircraft features the High-resolution Interferometer Sounder to provide data on atmospheric temperature and water vapor; an airborne Doppler lidar, called Tropospheric Wind Lidar Technology Experiment; the Cloud Physics Lidar; and dropsondes, devices created by the National Center for Atmospheric Research to measure storm conditions as they fall from aircraft to the ground.