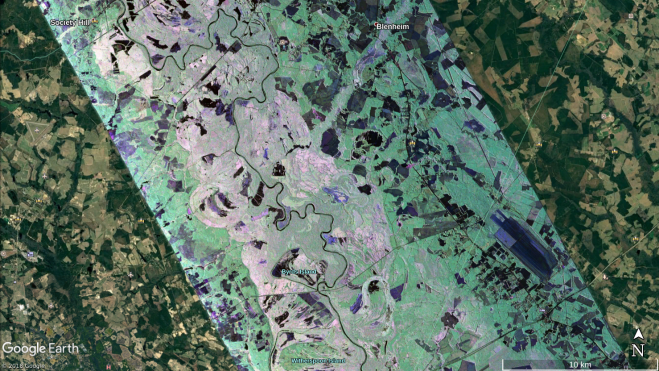 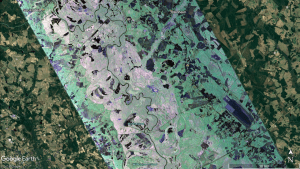 An image shows extensive water inundation along the Pee Dee River in South Carolina, which is visible as various shades of pink pixels across a broad area of 8-10 kilometers. (Credit: NASA/Google)

A NASA airborne science team flew an agency Gulfstream-III aircraft over the region between Sept. 17-23, surveying flooded areas and collecting data. Scientists analyzed the data with supercomputers to produce maps and other information on the extent of flooding and water levels that were provided to federal, state and local agencies planning the disaster response.

“This deployment brought multiple NASA centers together with federal and state agencies, emergency responders, academic researchers, and university computing facilities with one goal in mind: help those most impacted by Hurricane Florence,” said Gerald Bawden of NASA’s Earth Science Division in Washington.

The information gathered by these flights is critical to local authorities providing rescue and recovery to assess covered roadways and prioritize recovery efforts as flood waters recede. The main goal was to rapidly map water inundation extent along river floodplains and potentially identify damage and blockage to infrastructure such as roadways and levees.