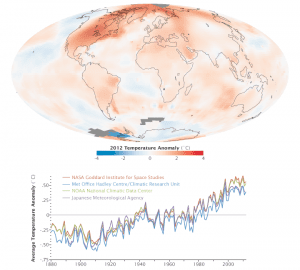 This map depicts temperature anomalies, or changes, by region in 2012; it doesn't show absolute temperature. Reds and blues show how much warmer or cooler each area was in 2012 compared with an averaged base period from 1951“1980.

Scientists at NASA's Goddard Institute for Space Studies (GISS) say 2012 was the ninth warmest year since 1880, continuing a long-term trend of rising global temperatures. The 10 warmest years in the 132-year record have occurred since 1998. The last year that was cooler than average was 1976.

One more year of numbers isn't in itself significant, said GISS climatologist Gavin Schmidt. What matters is this decade is warmer than the last decade, and that decade was warmer than the decade before. The planet is warming. The reason it's warming is because we are pumping increasing amounts of carbon dioxide into the atmosphere.