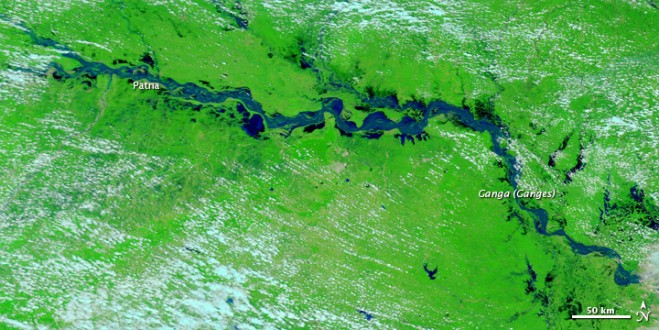 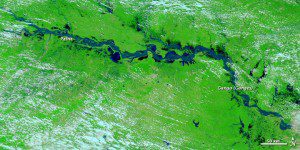 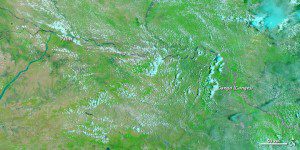 Flooding in more than 1,000 villages in Bihar, India, forced residents from their homes by late August 2011, according to the Indo-Asian News Service. After two years of drought, the Kosi River and Ganga (Ganges) River were rising rapidly.

The Moderate Resolution Imaging Spectroradiometer (MODIS) sensor on NASA’s Terra satellite captured these images of a stretch of the Ganga, or Ganges, River around Patna Aug. 30, 2011 (top), and June 23, 2011 (bottom). The images use a combination of infrared and visible light to increase contrast between water and land. Water ranges in color from electric blue to navy. Vegetation is green. Clouds are pale blue-green.

Water often rises along the Ganga during monsoon season, which typically lasts from June to August. In August 2011, however, waters rose high enough to pass the danger mark in multiple locations. In the August image, the swollen river has spilled onto floodplains to the north and south. The Indo-Asian News Service reported widespread damage to crops and destroyed homes.