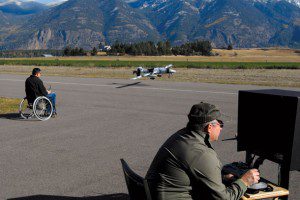 Justin Sand, left, and Don Bintz communicate as they pilot the Sandstorm, an unmanned aircraft, while demonstrating the technology at an airstrip south of Columbia Falls.

The Wright brothers would have appreciated the milestone that unfolded behind a small airplane hangar on Middle Road south of Columbia Falls, Mont., last week.

A battery-powered, fixed-wing aircraft with a 15-foot wingspan and weighing about 40 pounds buzzed down the runway past a group of onlookers and climbed into the empty sky. The airplane's two pilots remained seated on the tarmac more than 100 feet below, guiding every move with handheld devices.

The crowd of almost 50 people, including two state senators and an official from the Federal Aviation Administration (FAA), witnessed the leading edge of aviation on Nov. 1”the first test flight of an FAA-approved experimental unmanned aircraft, or drone, made in Montana.

The first drone, named the Sandstorm, was one of three prototypes unveiled that could be developed on a production level in Montana and used for a variety of tasks, such as detecting and monitoring wildlife, managing crops or surveying wildfires, among other abilities performed from high in the sky.

Although much smaller in size, the drones are similar in design to the larger Predator drones that revolutionized military aviation. The U.S. Air Force and Central Intelligence Agency uses Predators for surveillance and offensive operations overseas.

Sen. Ryan Zinke of Whitefish, Mont., who is running for lieutenant governor alongside Neil Livingstone, became familiar with military drones during his tenure as deputy commander of Special Forces in Iraq and commander of SEAL Team 6. He believes the next phase in aviation is going to be transitioning the military technology to commercial use.

In a wildfire, what we can do (with a drone) is identify every hot spot; we can do a three-dimensional overlay of the fire; we can identify who and where every individual firefighter is, Zinke said.

Zinke and Great Falls state Sen. Ed Buttrey are leading the campaign to develop an industry in Montana for developing and testing commercial-application drones. With the support of senators Max Baucus and Jon Tester, Zinke and Buttrey believe Montana”with un-crowded skies and diverse terrain and weather”is a natural fit for a burgeoning industry that could offer countless jobs and commerce.

Buttrey, who is co-director at the Whitefish-based Center for Remote Integration, estimates unmanned aircraft in the commercial sector to be potentially a $30 billion industry.

Ryan (Zinke) and I have always believed that this has been a breeding ground for small technology-based companies, Buttrey said. It's just an absolute perfect place to do research and development. This is really the tip of the iceberg. This is where we prove that you can take existing technology, commercialize it, make it affordable, make it producible and with limitless benefits.

Sen. Baucus voiced his support through a letter that Zinke read during the gathering.

I believe there is so much potential for Montana to lead the way in this emerging billion-dollar industry, Sen. Baucus said in his letter. Our troops rely on this type of technology every day, and there's enormous future potential in border security, agriculture, and wildlife and predator management.

Baucus said he is pushing for an amendment to the FAA reauthorization bill that would establish six unmanned aircraft testing sites across the country. Simply getting approval from the FAA to fly the Sandstorm was a huge milestone, Zinke said.

As a risk-averse agency, FAA has strict rules in place for occupying the skies and presents a challenge for the future of unmanned aircraft. Going forward, the other drones being developed locally by Unmanned Systems Inc., a company based in Nevada, will continue to be reviewed for FAA certification, according to Buttrey.

Bintz didn't even watch the plane as it soared through the air.

Instead, he guided it with a joystick while gazing into a small television screen that displayed the plane's view, similar to a flight simulator. A few feet away, Sands, acting as the safety backup pilot, watched the plane, holding a small remote control piloting device and telling Bintz what he saw.

The drones can be flown through the Internet from as far away as 1,500 miles and can reach as high as 400 feet in the air. They can fly for up to two hours in their current form. The maximum airspeed for the Sandstorm is 70 knots, or 80 miles per hour. The Trogdor, a turbine-powered model, can reach 115 mph.

We're on the leading edge and building the best new product in the world, Buttrey said.

The next scheduled test flight is in early December at Malmstrom Air Force Base in Great Falls, Mont.