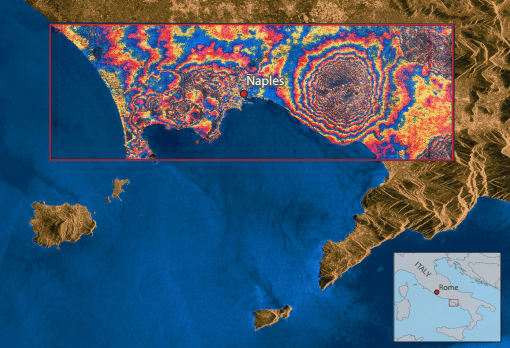 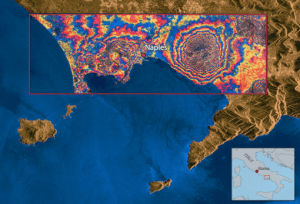 This ERS-1 satellite image of the Bay of Naples, Italy, is a combination of a radar image and an interferogram of Vesuvius and its vicinity. Using radar-based interferometry, it is possible to produce detailed 3-D relief maps of Earth’s surface with an accuracy of a few millimeters.

Eruptions of super volcanoes are a thousand times larger than those of normal volcanoes and only a handful exist around the world. Learn how satellites keep an eye on these giants.

One such super volcano, Campi Flegrei, also known as Phlegraean Fields, hides with its huge reservoir of molten rock just 4.5 kilometers under the densely populated western suburb of Naples in Italy. In recent years it has become increasingly restless, and the ground has risen more than it has in a long time. Therefore, the Italian Department of Civil Protection raised the alert level for Campi Flegrei, as there are major concerns that a magma chamber under the volcano is filling and increasing in pressure, amplifying the likelihood of a devastating eruption.

The European Space Agency Copernicus satellitescan measure the displacement of volcano surfaces, identifying areas of uplift and subsidence to millimeter accuracy. This enables continuous mapping of surface discontinuities and characterization of dynamic surface processes. These include dome growth due to lava extrusion and the development of flank instabilities over vast areas. Also this latest uplift phase of the Phlegraean Fields can be detected, and areas of maximum ground deformation can be identified.