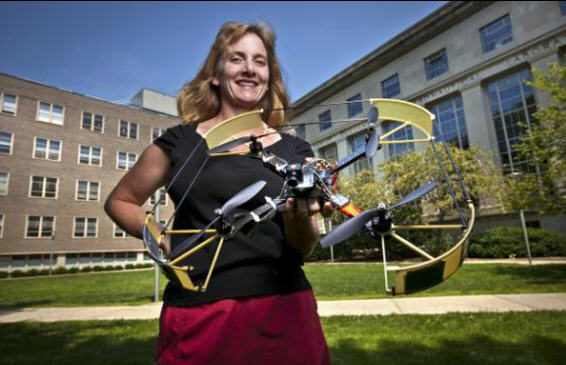 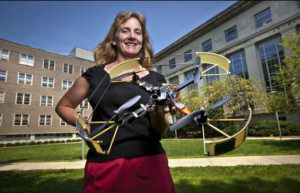 Missy Cummings and her team of MIT students are developing vehicles the size of a pizza box, equipped with cameras that can stream video of otherwise inaccessible locations. Click on image to enlarge.

Missy Cummings, the director of MIT’s Humans and Automation Lab, has developed software to fly remote-controlled miniature aircraft with an iPhone. The project has funding from Boeing.

Cummings was a Navy fighter pilot for 10 years, flying F/A-18 Hornets and A-4 Skyhawks. Now she and her team of a dozen students are developing unmanned aircraft systems (UASs) the size of a pizza box and equipped with cameras that can stream video of otherwise inaccessible locations. With funding from Boeing, they are devising controllers that are easy to use—even for untrained operators.

“The great use of a UAS at this point has been in the dull, dirty, and dangerous environments,’’ said Joshua Downs, a human factors specialist at Boeing and technical leader of the Boeing-MIT research project. “It could be a situation where the environment itself is toxic to a person, like what’s happened in Japan as a result of the earthquake.’’

For the project, Cummings and her students are using a quadro-copter—a mini-helicopter with four rotors—called the Ascending Technologies Hummingbird, which can fly up to 30 miles per hour. They purchased the prefabricated vehicle online for $4,000 and added a $50 miniature camera so they could see the world from the UAS’s point of view.

The iPhone application takes advantage of an accelerometer built into the phone. Operators can move the phone up, down, left or right as if it was a joystick, and the vehicle moves accordingly. For less fine control, they can type in the GPS coordinates of the destination. Operators can watch video or look at snapshots taken by the onboard camera on the iPhone screen.

According to Cummings, operators are actually just nudging the vehicle along, as it knows how to stabilize itself and makes only small adjustments according to the directions it is given. Though Cummings developed the interface for an iPhone, the UAS can communicate with any smart phone that has a wireless or cellphone connection “The problem isn’t that commercial UASs don’t exist,’’ said Downs. “The problem is they’re difficult to grasp and take as much training to fly as a traditional pilot would need.’’

Cummings said that with the new application, anyone could learn to fly a UAS with a smart phone and three minutes of training. To test this theory, she and some of her students flew to Boeing’s offices in Seattle, from where they were able to fly the Hummingbird back at MIT by using the iPhone they had with them.

Article and image courtesy of Boston.com