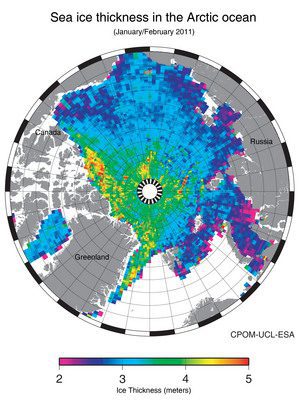 CryoSat’s detailed data have been used to generate a map of sea-ice thickness in the Arctic. Thanks to CryoSat’s orbit, ice thickness close to the North Pole can be seen for the first time.

After nearly a year and a half of operations, the European Space Agency’s CryoSat satellite has yielded its first seasonal variation map of Arctic sea-ice thickness.

Results from the agency’s ice mission were presented on April 24 at the Royal Society in London. In June 2011, the first map of Arctic sea-ice thickness was unveiled, using CryoSat data acquired between January and February of that year. Now the complete 2010–11 winter season data have been processed to produce a seasonal variation map of sea-ice thickness.

This is the first map of its kind generated using data from a radar altimeter at such a high resolution compared with previous satellite measurements. CryoSat’s altimeter makes precise measurements of its height above the ice by measuring the time interval between the transmission and reception of short radar pulses.

Readings over the Arctic from October 2010 to March 2011 were processed to map the seasonal formation of floating ice. ESA and NASA have been collaborating to perform carefully coordinated flights directly under CryoSat’s orbit over the Arctic, gathering data to ensure the accuracy of the satellite measurements. This first validated CryoSat dataset demonstrates the full potential of this innovative ice mission.