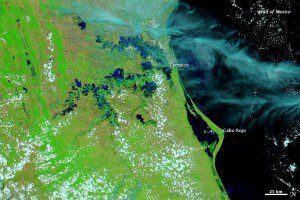 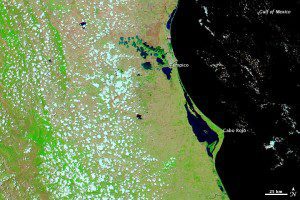 On June 30, 2011, Tropical Storm Arlene made landfall near Cabo Rojo in Veracruz, Mexico. As the storm came ashore, the U.S. National Weather Service forecast total rainfall accumulations up to 8 inches (20 centimeters), and warned of potentially life-threatening flash floods and mudslides.

The impact of Arlene's heavy rain was clear in early July as the Moderate Resolution Imaging Spectroradiometer (MODIS) on NASA's Aqua satellite passed overhead. MODIS captured the top image on July 5, 2011. For comparison, the bottom image shows the same area on June 19, 2011.

The images use a combination of visible and infrared light to increase contrast between water and land. Water varies from electric blue to navy. Depending on land cover, areas above water range in color from green to brown. Clouds are pale to medium blue-green.

A network of lakes extends inland from the city of Tampico. In the image from July 5, the lake network appears to have multiplied, with standing water covering large areas northwest and southwest of the city. Standing water is also apparent south of Cabo Rojo.

On July 5, 2011, the Mexican government raised the official death toll for Arlene to 22, the Associated Press reported. Deaths occurred in multiple states, with the most deaths in Hidalgo.

Arlene was the first named Atlantic storm of the season.