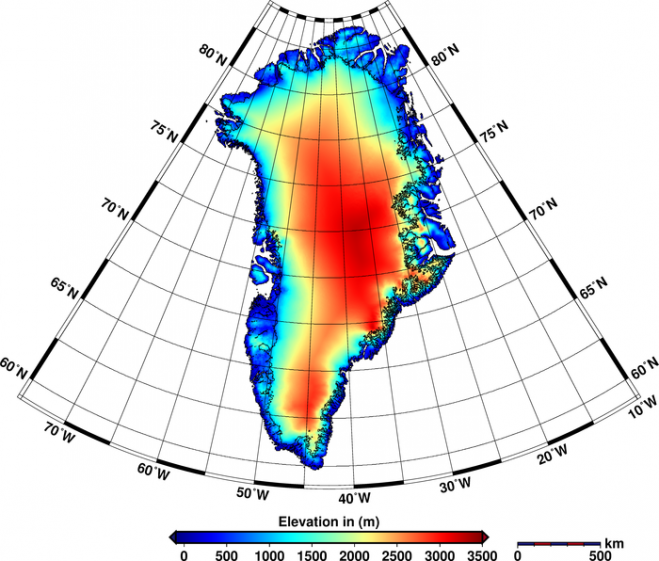 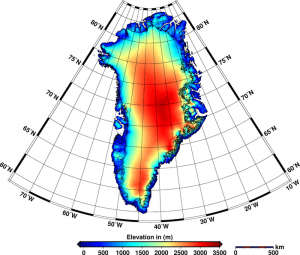 This new elevation model of Greenland incorporates 7.5 million measurements from CryoSat collected throughout 2012. The edge of the ice sheet is outlined in black. The data reveal that the Greenland ice sheet is reducing in volume by about 375 cubic kilometers a year and Antarctica is losing 125 cubic kilometers a year. This combined loss is the highest rate observed since satellite altimetry records began about 20 years ago.

The research was carried out by Germany’s Alfred Wegener Institute Helmholtz Centre for Polar and Marine Research, and the results were published in The Cryosphere, a European Geosciences Union journal. The new maps, which incorporate 7.5 million elevation measurements of Greenland and 61 million of Antarctica collected by CryoSat in 2012, are the most complete to date from a single satellite mission.

Lead author Veit Helm said, “The new elevation maps are snapshots of the current state of the ice sheets. They are very accurate and cover close to 16 million square kilometers, which is 500 000 square kilometers more—about the size of Spain—than previous elevation models from altimetry.”

Reaching latitudes of 88°, CryoSat orbits closer to the poles than earlier missions. It carries SIRAL, a precise radar altimeter that sends out short radar pulses that bounce off the ice surface and back to the satellite. Measuring the time this takes yields the height of the ice.

In fact, SIRAL is the first radar altimeter of its kind to overcome the difficulties intrinsic to measuring icy surfaces. The instrument allows scientists to determine the thickness of ice floating in the oceans and to monitor changes in the vast ice sheets on land, particularly around the edges where icebergs are calved.