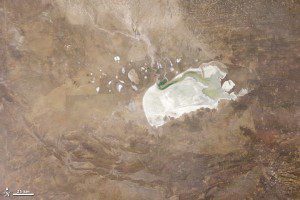 This June 5, 2012, image from NASA's Terra satellite was collected on the first day of a nearly two-week prescribed burn west of Etosha Pan, Namibia.

Fires used to be routine in the grasslands and woodlands surrounding Etosha Pan, an old, salt-encrusted lake bottom in northwestern Namibia. The region is best known for Etosha National Park, a wildlife preserve that is home to substantial populations of rhinos, elephants, lions and other large mammals.

Before human intervention, all of Etosha National Park's savannas and mopane woodlands would burn about once per decade. Fires would usually come after a wet spell had produced a surge of vegetation growth. As plants dried up in this arid region”normal rainfall is 250 to 500 millimeters (10“20 inches) per year”it became ideal tinder for bush fires triggered by lightning storms.

But in the decades after the park's establishment in 1907, managers tended to extinguish wildfires quickly because they believed them to be harmful to savanna ecosystems. As recently as the 1970s, manmade fires were forbidden, and teams of firefighters fought lightning-triggered fires aggressively.

Over the years, fire management at Etosha National Park evolved. With evidence piling up that savannas needed occasional fire to keep the ecosystem healthy, park managers started using it as a tool in 1981. However, there were no firm guidelines on how to use prescribed fires or cope with accidental fires. In September 2011, for instance, a destructive wildfire was ignited by a nearby charcoal kiln. The flames raged through the park, charring 370,000 hectares (910,000 acres) of vegetation and killing at least 30 rhinos, 50 giraffes and seven elephants.