May 21, 2014
Making Sure CryoSat Data Are Reliable 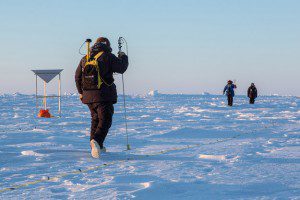 Scientists venture out on the sea ice north of Greenland as part of the 2014 campaign to validate CryoSat measurements. Keeping an eye out for polar bears, the ground team took measurements of snow and ice depth and detailed ice properties. Along with data acquired from the air, the measurements are compared with CryoSat data to ensure the satellite is delivering true information about Earth’s changing ice.

Enduring the bitter Arctic cold out on the sea ice, scientists are part of an international effort to ensure the European Space Agency’s CryoSat satellite delivers a true picture of Earth’s changing ice.

Considered a barometer of climate change, diminishing polar ice has been a hot topic for several years. Over the last few decades, satellites have shown a downward trend in the area of Arctic Ocean covered by ice. However, until CryoSat was launched in 2010, little information was available on the thickness of the ice.

Understanding changes in ice thickness is crucial to working out how the actual volume is varying—a better indicator of change in the Arctic environment. Given the crucial nature of understanding the links between ice and climate, as well as the environmental consequences of change, the European Space Agency (ESA) goes to great lengths to make sure the measurements taken by CryoSat are accurate.

This means venturing out to the far reaches of the polar regions to collect readings to compare with those from CryoSat. The chilly work includes taking independent measurements of the ice using special sensors on aircraft, along with painstakingly measuring snow and ice depth actually on the sea ice. Reflecting the value and importance of ESA’s ice mission, scientists from numerous European and North American organisations volunteered to endure the harsh polar environment in these extensive field campaigns.