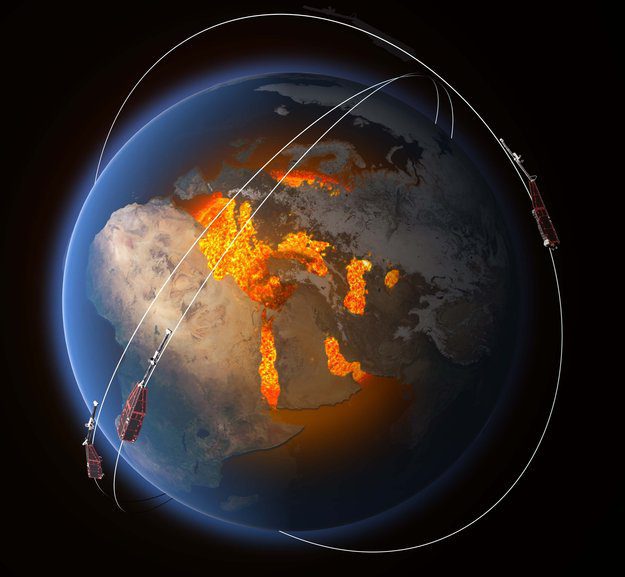 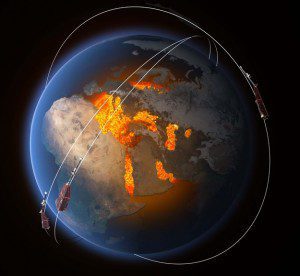 The magnetic field is thought to be generated largely by an ocean of superheated, swirling liquid iron that makes up Earth’s outer core 3,000 km under our feet. The iron ocean generates electrical currents and thus the continuously changing electromagnetic field. Other sources of magnetism come from minerals in Earth’s mantle and crust, while the ionosphere, magnetosphere and oceans also play a role. ESA’s constellation of three Swarm satellites is designed to identify and measure precisely these different magnetic signals.

With launch just a month away, European Space Agency (ESA) engineers begin the delicate task of attaching three identical Swarm satellites onto a rocket for simultaneous release into orbit.

The Swarm satellites and all the equipment needed to prepare them for liftoff arrived at the Plesetsk launch complex in Russia just over three weeks ago. The cargo plane made three round trips to transport the whole shipment, amounting to about 60 tons, from Munich, Germany.

Since their safe arrival, the three satellites have been unpacked, have undergone various tests to make sure their components work as they should, and have been fueled with Freon 14 and tested for leaks. The valves in the propulsion system also have been tested—which, interestingly, included listening to them with a stethoscope. All this hasn’t only been a technical undertaking, but also a logistical challenge because the three satellites have had to be moved one by one in and out of the fueling hall.

Swarm is ESA’s first constellation of satellites for Earth observation. The design of the satellites isn’t only a result of the instrument package they carry, but also because they have to be compact enough to all fit into the launcher fairing. Equipped with magnetic sensors and flying in carefully selected orbits, the three Swarm satellites will identify and measure, precisely, the different magnetic signals that stem from Earth’s core, mantle, crust, oceans, ionosphere and magnetosphere, which together form our magnetic field.