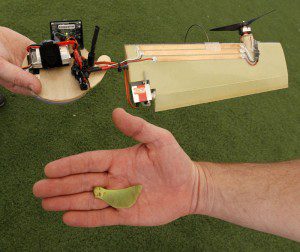 Lockheed Martin’s Intelligent Robotics Laboratories in Cherry Hill, N.J., has spent the last five years developing an unmanned aerial vehicle (UAV), dubbed the Samarai, to replicate the motion of maple tree seeds softly whirring through the air like one-winged helicopters. Its engineers gave The Associated Press a preview in early August at an indoor soccer field in Southampton, N.J.

The Samarai is about a foot long and has just two moving parts plus a camera. It can be controlled by a remote control or by an app on a tablet computer.

Recently engineers Dave Sharp and Craig Stoneking piloted a Samarai, which in flight looked like a translucent blur around a pair of blue and red lights. They moved it from the soccer field to the ceiling some 30 feet above and across the field. By remote control, the flight was steady. With the easier-to-use app, it twirled around a bit, not unlike a maple seed. That, according to Stoneking, will be fixed in the future.

The idea isn’t new. Students at the University of Maryland built a smaller maple seed-inspired flyer a few years ago. Bill Borgia, director of the Lockheed Martin lab, said it could be useful for the military and police, as well as his lab’s work on other devices.

Troops could carry the devices in their backpacks, launch them by throwing them like boomerangs and use real-time images from cameras to find out what might be around the next corner.

They could be dropped from plane to collect ground-level images instead of just the aerial images used now. Troops or police officers could use them even to get a look inside buildings. Unlike most drones used by the military, these can hover in place like a helicopter and take off vertically in tight spaces.

They could come in a variety of sizes and be produced cheaply by 3-D printing, which uses layers of plastic to create objects. Putting a motor on a piece of plastic that shaped like a maple seed and getting it to fly was relatively easy, according to Borgia. Learning to control the natural movements was the challenge.

Borgia said the lessons learned trying to harness and mimic a natural design have already been used in some of his lab’s other projects”robots that behave like human hands or move about like insects. Lockheed officials wouldn’t say how much it cost to develop or which government agencies helped fund the research.