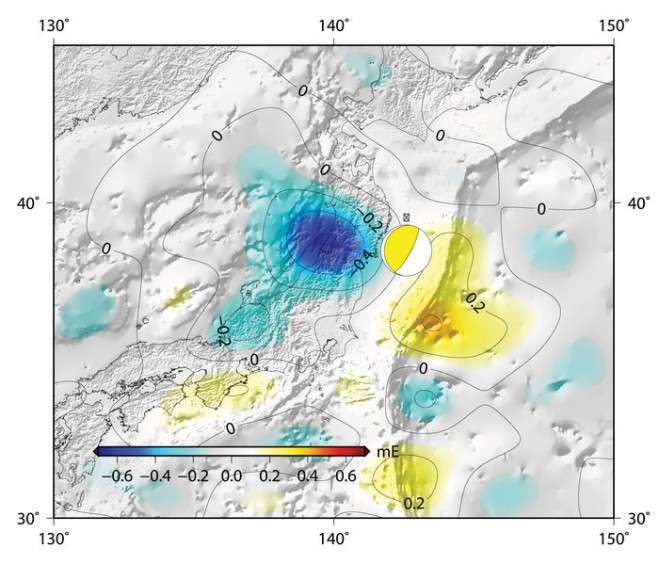 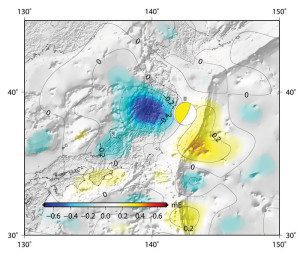 This image portrays a “gravity scar,” specifically, the changes in Earth’s gravity field resulting from the earthquake that hit Japan on March 11, 2011. A combination of data from ESA’s GOCE mission and the NASA–German Grace satellite shows the vertical gravity gradient change. The “beachball” marks the epicenter

Although the European Space Agency’s GOCE satellite is no more, its measurements acquired during four years in orbit have been drawn together to offer new opportunities for science.

Carrying the first 3-D gravity sensor in space, the state-of-the-art satellite measured Earth’s gravity with unprecedented accuracy. GOCE’s four years in orbit resulted in a series of four gravity models, each more accurate than the last. The models have been used to generate corresponding “geoids”— the surface of a global ocean molded by gravity alone. Shaped by differences in gravity, the geoid is a crucial reference for understanding ocean circulation, sea-level change and ice dynamics.

From a mission that just keeps giving, a fifth model has been produced, incorporating data collected throughout the satellite’s 42-month operational life. The previous geoid, released in March 2013, was based on 27 months of measurements.

The satellite was designed to orbit at an extremely low altitude of 255 km to gain the best possible gravity measurements. At the end of 2012, low fuel consumption allowed operators to extend its life and start to lower the satellite another 31 km for even more accurate measurements. This was at the limit of its capability but maximized the return for science.