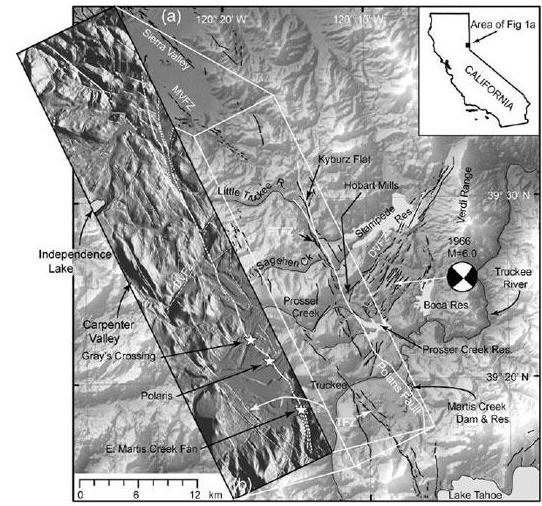 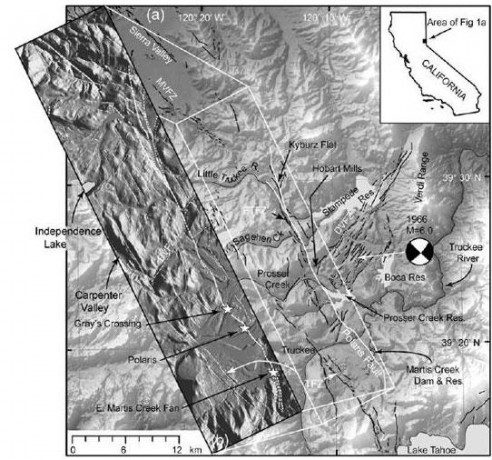 You’d think in a seismically active area like California that every potentially earthquake-producing fault to be found would’ve been identified. It turns out there are plenty of such faults hiding in the ground, and one of them was found recently.

Scientists with the U.S. Army Corps of Engineers were inspecting the Martis Creek Dam, which sits just outside Truckee, Calif., and about 35 miles upstream from Reno, Nev. The dam is one of 10 in the United States that has “urgent and compelling” safety concerns, according to the Corps, which owns the dam. Data from the most recent evaluation revealed that the dam has significant leakage and lies in close proximity to three fault zones.

The newly discovered, active, 22-mile-long strike-slip fault is named Polaris for the old mining town it runs through. The Polaris Fault was discovered using light detection and ranging (LiDAR) technology, which was used as part of the Corps’ evaluation of the dam. LiDAR emits laser pulses down toward the ground from an airplane—even through dense vegetation—to get high-resolution topology maps. Once researchers stripped off the heavy pine tree layer from the maps, they found evidence of the fault sitting just 200 meters from the dam.

“We weren’t expecting it at all,” said Lewis Hunter, a senior geologist for the U.S. Army Corps of Engineers Sacramento District.

By looking at the glacial terraces that run through the area, geologists found that one of the terraces offset by seismic activity on the side of the Truckee River was about 15,000 years old, well within the 35,000 years that the Corps uses to define an active fault. “We feel very confident it’s within our range for being active,” says Hunter.

The fault could produce an earthquake with up to a 6.5 to 6.9 magnitude, according to the study published by Hunter and his colleagues in the June issue of the Bulletin of Seismological Society of America. Because the fault connects to others in the area, the magnitude could be even higher if they ruptured at the same time.

As for the Martis Creek Dam, Polaris just adds to its seismic worries. Hunter noted that because the dam is already known to be in an active fault zone—another fault runs directly under the dam—the water levels are kept as low as possible. However, because Polaris sits between the dam and its spillway, if the water levels were higher than usual, a big earthquake could potentially flood a portion of Reno.

Although one U.S. Geological Survey scientist described the finding to Hunter as like being “slapped in the face,” the reality is that there are likely countless smaller unknown faults in the region and around the world. According to Hunter, throughout the east face of the Sierra Nevada Mountains, there are quite a few systems that are likely undiscovered but responsible for a large portion of tectonic movement. “They are there,” he said, “and potentially a hazard.”