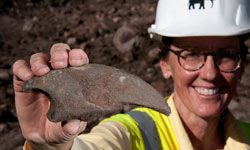 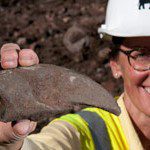 A researcher displays one of more than 4,000 Ice Age fossils unearthed near Snowmass Village, Colo.

Crews are scheduled to dig at Colorado’s Ziegler Reservoir site for Ice Age fossils until July 1, 2011, when work on the expanded reservoir will be completed. Crews from the Denver Museum of Nature & Science have pulled 4,056 fossils from the site since work resumed this spring.

“While much of our activity has centered around salvaging fossils from the core of the dam site, we are now entering a phase of intense scientific investigation about the origin of the Ice Age lake and its history,” says Dr. Kirk Johnson, the leader of the excavation team and vice president of the museum’s Research and Collections Division.

The scientists are among 37 experts from 15 institutions in the United States, Canada, Spain and England who are involved in the project and whose work will make the most of the site’s scientific potential. Their onsite activities include collecting cores of sediment from the ancient lake bed, studying the sediment that fills the ancient lake, making high-resolution scans of in-place fossils and collecting various samples for analysis.

Sediment Cores
“Sediment cores are a very important way for us to sample the complete sequence of lake sediments and preserve them for future research,” says Johnson. “They are a critical piece of the science that can be archived and studied for climate information such as temperature changes and drought.”

A small drill rig, operated by scientists from U.S. Geological Survey offices in Lakewood, Colo., is drilling 20 to 30 feet into the sediment and pulling cores that are two inches in diameter so scientists can access and study all the sediment layers that accumulated in the ancient lake. These cores will first be studied in Denver and then move to the University of Minnesota where they will be permanently stored at the National Lacustrine Core Facility. Funded by the National Science Foundation, the facility was established in 2000 to archive high-quality sediment cores from lakes all around the world and make them available for research.

High-Resolution LiDAR Scans
A team from the Colorado Water Science Center is collecting light detection and ranging (LiDAR) ground laser scans of select fossils. These scans are precise to within a few millimeters and will allow scientists to reconstruct parts of the site with high-resolution 3-D models. These scans are particularly useful for mapping areas where numerous fossils occur together and where this information may shed light on the burial history of the fossils. For example, the team has located a portion of the ancient lake shoreline, which contains a partial mastodon skeleton interlocked with driftwood logs up to 35 feet long. The LiDAR scans provide a detailed map of the site that allows the dig teams to document the site rapidly before continuing their excavation.

Samples
The team of scientists is also gathering thousands of samples from the site to study fossil pollen and spores, insects, plants, and the character and chemistry of the lake sediment. These samples will provide critical information about the ancient landscape’s ecology and climate. By working together at the site, the different specialists are able to coordinate their sampling and assure that the scientific results will be integrated. Moving forward, the Denver Museum of Nature & Science will serve as the coordinating organization to ensure that the scientific team capitalizes on the amazing opportunities presented by this sequence of high-elevation ice age ecosystems.

Image courtesy of the Denver Museum of Nature & Science.