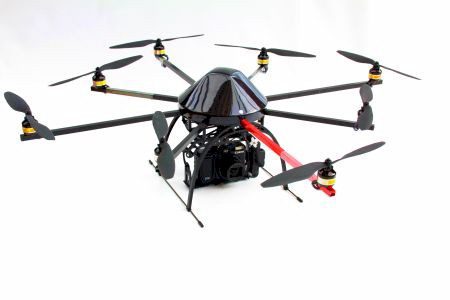 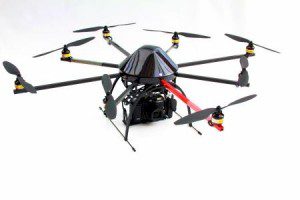 An eight-rotor OktoCopter UAV is being used by the University of Tasmania for mapping projects. Click on image to enlarge.

The vineyards of Home Hill winery at Ranelagh buzzed recently with the arrival of a team from the University of Tasmania armed with two micro-helicopters.

Dr. Arko Lucieer, a senior lecturer with the School of Geography and Environmental Studies, and up to 20 students spent the day measuring the advance of a 1996 landslide at Home Hill. The two micro-helicopters—called OktoKopters or unmanned aerial vehicles (UAVs)—will be deployed to help produce a 3-D model of the landslide.

The UAVs, which have eight rotors and can follow a predefined flight path, are shaping up as a vital tool in mapping terrain ranging from Antarctic moss beds to coastal erosion.

The School of Geography and Environmental Studies is now home to two UAVs. A third, which can fly higher and further, is on order.

Each OktoKopter costs about $3,000, but the sophisticated sensors they carry are much more expensive, bringing the total cost to $60,000.

The UAVs are deployed by Dr. Lucieer and the TerraLuma project team as a cheap alternative to high-resolution satellite imagery. Flying at altitudes ranging from just 50 meters to 120 meters, they can photograph micro-topography in remarkable detail.

Dr. Lucieer compares the UAV to having “our own little satellite.”

“It is a very stable platform for aerial photography and is equipped with an IMU (inertial measurement unit), a device that measures and reports on a craft’s velocity, orientation and gravitational forces; GPS; and autopilot.

“It is fitted with a standard digital SLR, plus a six-band multispectral sensor and a thermal sensor. It also comes with software that allows you to communicate with it in real time.”

Other members of the team are also investigating the UAVs.

Luke Wallace is exploring their application to forestry practices as an alternative to traditional LiDAR technology, which is fitted to aircraft or satellites. LiDAR is expensive, so it can be used by forestry companies only once every five to 10 years. PhD student Steve Harwin is testing UAVs in mapping coastal erosion and high-value crops such as poppies. Darren Turner is conducting trials at the Frogmore Creek vineyard, investigating UAVs for precision viticulture.

Article from the University of Tasmania. Image courtesy of Quadrocopter LLC.