LDCM: Returning to the Launch Site 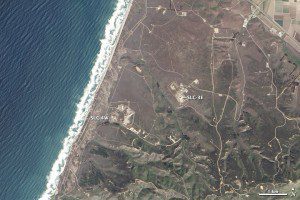 LDCM lifted off from Space Launch Complex 3 East (SLC-3E), visible in this image. To the west, SLC-4W was the site of more than 90 rocket launches from 1963 to 2003. Note that the scene is clear and resolved enough to show ocean waves offshore.

Most of the Earth science satellites developed or operated by NASA during the last few decades, including the new Landsat Data Continuity Mission (LDCM), were launched from Vandenberg Air Force Base, Calif. 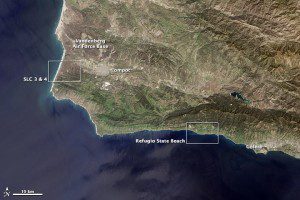 The Operational Land Imager on LDCM captured these views of its launch site, the nearby city of Lompoc, and the surrounding landscape on March 22, 2013.

The newest satellite in the venerable Landsat program launched from this spot along the central California coast on Feb. 11, 2013, following the path of its seven predecessors. LDCM is extending and expanding a 41-year record of land observations.

Vandenberg is NASA's preferred launch site for satellites that are headed into polar orbits. The Air Force base sits on a parcel of land that juts out into the Pacific Ocean, allowing rockets to launch to the south without flying over populated areas. Satellites that are headed into a west-east orbit are typically launched from Kennedy Space Center.