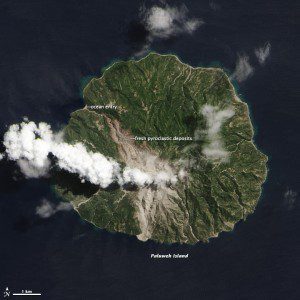 This natural-color satellite image collected by NASA's Landsat 8 on Sept. 4, 2013, shows the effect of the eruption. A wide swath of gray and tan that narrows to the northwest shows the path of the deadly pyroclastic flow”a fast-moving mix of extremely hot ash, gas, rocks and volcanic debris. As the flow descended from the 875-meter (2,870-foot) summit of the volcano, it was funneled into existing stream channels and entered the ocean along the northwest coastline, extending the beach by a few meters.

A fresh scar on the north side of Indonesia's volcanic Paluweh Island is a harsh visual reminder of the Aug. 10, 2013, eruption that deposited material to the north and killed five people. 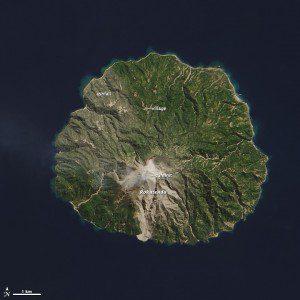 Landsat 8 collected this natural-color image on Aug. 3, 2013, a week prior to the eruption.

According to an Aug. 4 Jakarta Globe report, disaster agency officials struggled to convince villagers on the tiny island to evacuate their homes as Mount Rokatenda continued to erupt, spewing hot ash and endangering the residents of five villages reportedly bound to their ancestral land by local tradition.