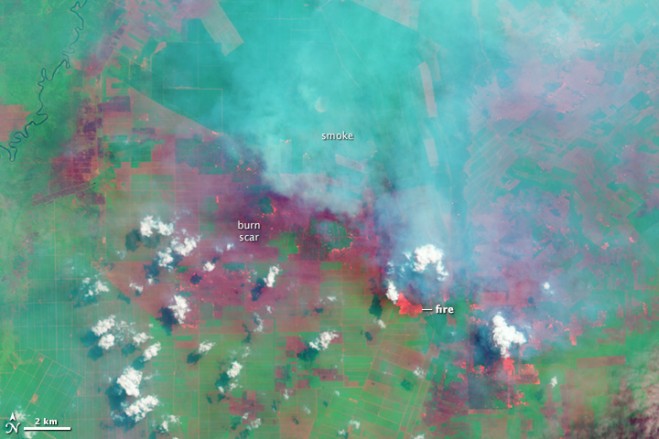 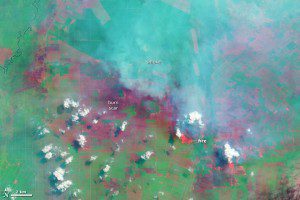 This June 25, 2013, Landsat 8 image was made with a combination of visible (green) and infrared light so that fires and freshly burned land would stand out. The blue smudge across the scene is smoke, while higher clouds are white. Fires glow orange, and newly burned land is dark red. Bare soil or older burn scars are a lighter shade of red. The fires burn within well-defined, rectangular fields, showing they were deliberately set to clear the land for farming.

A Landsat 8 satellite image of Riau—the Sumatran province closest to Singapore and site of recent fires—reveals the cause of the fires: land use.

In late June 2013, smoke billowed from thousands of fires on the Indonesian island of Sumatra and blew across the Strait of Malacca to Malaysia and Singapore. Haze-darkened skies have become all too normal during the tropical dry season in this region; but this year, air quality degraded more than ever before in Singapore. On June 21, the nation’s air quality index reached a record 400—the maximum level for good health is 100.

To curb such burning, the Indonesian government declared a temporary moratorium on new permits for land development in primary forest and peat land between 2011 and 2013. The moratorium has had little impact, according to the U.S. Department of Agriculture’s Foreign Agricultural Service. Palm oil plantations alone have increased by an average 630,000 hectares per year between 2011 and 2013, up from a growth rate of 500,000 hectares per year in the previous decade. This growth can continue for up to a decade at this rate without breaching the moratorium because palm oil producers already hold 6 million to 7 million hectares of undeveloped land.