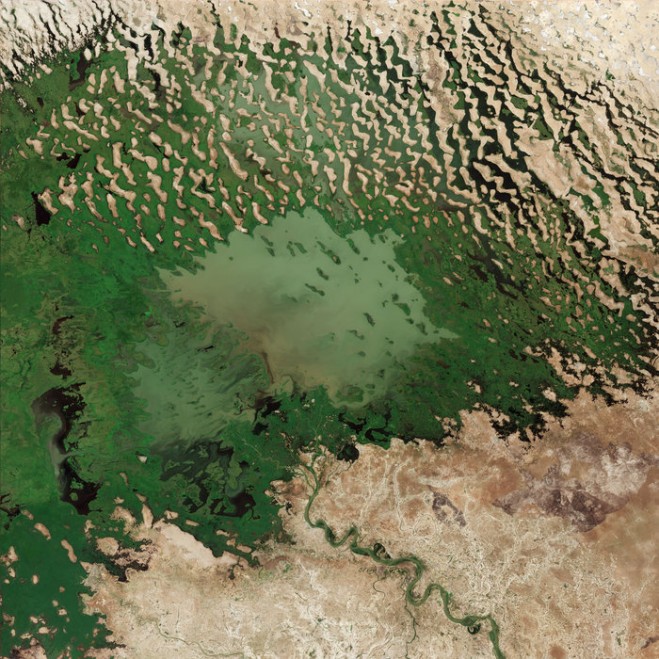 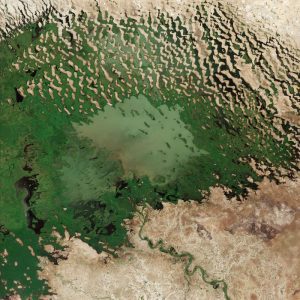 This image from the Copernicus Sentinel-2A satellite takes us over Lake Chad at the southern edge of the Sahara, where water supplies are dwindling. The rapid decline of the lake’s waters in just 34 years is clear to see in this comparison with an image acquired on Nov. 6, 1984, by the U.S. Landsat 5 satellite.

Once one of Africa’s largest lakes, Lake Chad has shrunk by approximately 90 percent since the 1960s. The receding water is due to a reduction of precipitation, induced by climate change, as well as development of modern irrigation systems for agriculture and the increasing human demand for freshwater.

Straddling the border of Chad, Niger, Cameroon and Nigeria, the lake is a major source of freshwater for millions of people in the area. It is also a source for irrigation and fishing, and it was once rich in biodiversity.

As the lake continues to dry up, many farmers and herders move toward greener areas or larger cities to seek alternative work. Several attempts have been made to replenish these shrinking waters, but little progress has been achieved.

The borders of the lake’s body are only partly visible in this image—the majority of the shoreline is swamp and marsh. The Chari River, visible snaking its way towards Lake Chad at the bottom of the image, provides more than 90 percent of the lake’s waters. It flows from the Central African Republic, following the Cameroon border from N'Djamena, where it joins with its main tributary the Logone River.