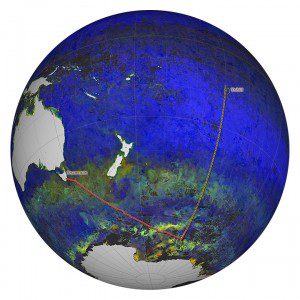 The background in this image is a composite showing light reflectance off the ocean surface between Feb. 10 and March 13, 2014, as measured by NASA's Aqua satellite. Areas with more particles suspended in the water are represented with orange, yellow and green. Blue areas have fewer particles.

Satellite sensors start collecting data soon after launch, but it takes time”and work on the ground”to ensure those observations are accurate and meaningful.

One of the best ways to do this is to send scientists into the field. In the case of a team of oceanographers from NASA's Goddard Space Flight Center, the field is the South Pacific and Southern Ocean, where they're making detailed observations of the water at the same time satellites pass overhead.

Now the researchers are in the midst of a 45-day journey southeast from Hobart, Tasmania, to the waters off Antarctica, and then northeast to Papeete, Tahiti. They are onboard the National Science Foundation ship Nathaniel B. Palmer, a 308-foot icebreaker that can accommodate 37 scientists and 22 crew members.

Each circle on the accompanying image represents a location where the team plans to lower a sensor package into the water to collect data on temperature, salinity, depth, and how much light the particles in the water absorb and scatter. When weather permits, the team also will deploy a radiometer, which measures light entering and exiting the water column.