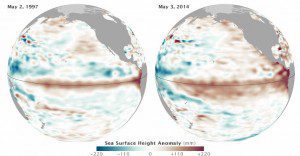 The maps above show the 10-day average of sea surface height centered on May 2, 1997, and May 3, 2014. Shades of red and orange indicate where the water is warmer and above normal sea level. Shades of blue-green show where sea level and temperatures are lower than average. Normal sea-level conditions appear in white.

Data from ocean-observing satellites indicate that El NiÃ±o conditions appear to be developing in the equatorial Pacific similar to those of May 1997, a year of the most potent El NiÃ±o events of the 20th century.