Is an Arctic Ozone Hole in Earth's Future? 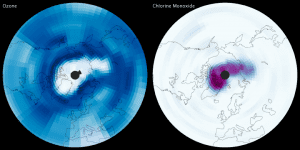 In March 2011, NASA's Earth Observatory published images of a rare, deep depletion in the ozone layer over the Arctic. The images came from daily observations made by the Ozone Monitoring Instrument on NASA's Aura satellite. A new study published in Nature uses a companion instrument on Aura, the Microwave Limb Sounder (MLS), to describe how and why the event looked a lot like the annual Antarctic ozone hole.

The research, led by Gloria Manney of NASA's Jet Propulsion Laboratory, describes the conditions that allowed these high concentrations of chlorine monoxide to develop. First, the atmosphere between 15 kilometers and 23 kilometers in altitude (part of the stratosphere) was persistently cold for more than 100 days”a month longer than in any previously observed year. Temperatures were cold enough that polar stratospheric formed over more of the Arctic atmosphere than ever seen before. The clouds provided a surface for stable chlorine gases to turn into reactive gases like chlorine monoxide.

The second factor was strong, swirling polar winds that isolate the Arctic. In the winter of 2010-11, this polar vortex was stronger than normal and persisted from December through March. The winds prevented Arctic air from mixing with the rest of the atmosphere, so chlorine monoxide built up in the region. Both the cold conditions and the winds persisted until sunlight returned to the Arctic in March, catalyzing the ozone-destroying reactions.

The difference between 2011 and other winters, which also have been extremely cold, is that temperatures were low enough to produce ozone-destroying forms of chlorine for a long time, according to Manney. While it's not clear why cold temperatures lasted so long in 2011, the fact that they did has some implications for the formation of an Arctic ozone hole in the future. If stratospheric temperatures drop as a result of climate change, Arctic ozone holes may happen more frequently. On the other hand, the study authors note, if the Montreal Protocol hadn't limited the concentrations of ozone-depleting chlorine monoxide in the atmosphere, then an Arctic ozone hole would form regularly, even in relatively warm winters.