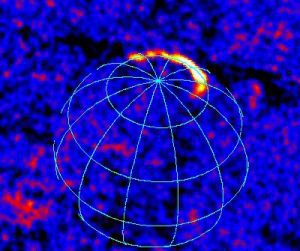 The European Space Agency (ESA) Integral satellite has been scouring the skies around Earth for signs of high-energy radiation since 2002, observing particles thrown off by extreme phenomena such as black holes, neutron stars and supernova explosions. The probe serendipitously spotted something especially interesting”and a little closer to home: intense auroras dancing around Earth's north pole. This image is a single frame from a longer sequence of images and shows the auroras forming a rough semi-circle at Earth's northern latitudes.

Integral was initially preparing for astronomical research when it spied this aurora; the probe was planning to observe the skies at X-ray wavelengths to measure something known as the cosmic X-ray background, a diffuse level of radiation that pervades the cosmos and is linked to high-energy events such as black holes devouring nearby material in far-away galaxies. This background is subtle and tricky to detect, and, in this case, the unexpectedly strong auroras illuminating the Earth drowned it out.

However, the observations were far from wasted. They may be known for their breathtaking light shows, but auroras can reveal much about the space surrounding our planet. They are created as particles from the solar wind enter the upper layers of our atmosphere and interact with matter there, triggering bursts of light and filling the sky with their characteristic glimmering, rippling sheets of color.

Auroras are transient and difficult to predict; capturing such an intense example with Integral helped scientists understand more about the distribution and amount of charged particles surrounding our planet and to characterise the interaction between the sun and our magnetosphere: the region of space over which Earth's magnetic field dominates.