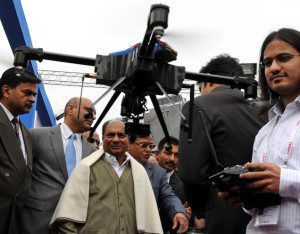 India's National Disaster Response Force (NDRF) is using Netra, an unmanned aerial system (UAS), to assess a landslide site in Ambegaon taluka. This is only the second time the disaster response force has used the indigenously developed high-tech surveillance technique in its rescue efforts. The NDRF team launched the UAS on Aug. 3, 2014, to rule out the presence of cracks and leaks on hills surrounding the disaster site.

The battery-operated, high-resolution surveillance instrument covers an area with a 2.5-km radius and transmits streaming visuals. It primarily is used to gather information about inaccessible areas and untraceable objects trapped there. The disaster response force inducted the UAS only last year.