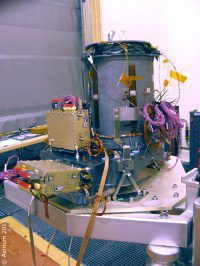 The Spot 6 telescope is shown here before being placed into the satellite.

India’s PSLV rocket will launch the Spot 6 commercial Earth observation satellite later this year under a contract announced April 3 by the Indian Space Research Organisation (ISRO). The 800-kilogram satellite, intended to operate from a near-polar low Earth orbit at 694 kilometers in altitude, will be accompanied on the launch by several other payloads that ISRO didn’t identify.

Astrium Services is building and launching the identical Spot 6 and 7 satellites using its own funds, with no assistance—nor any guarantee of future image purchases—by the French government. Astrium officials have said they expect to spend about 300 million euros ($400 million) to build and launch the two spacecraft. Spot 7 is scheduled for launch in 2014, with a launch vehicle yet to be announced.