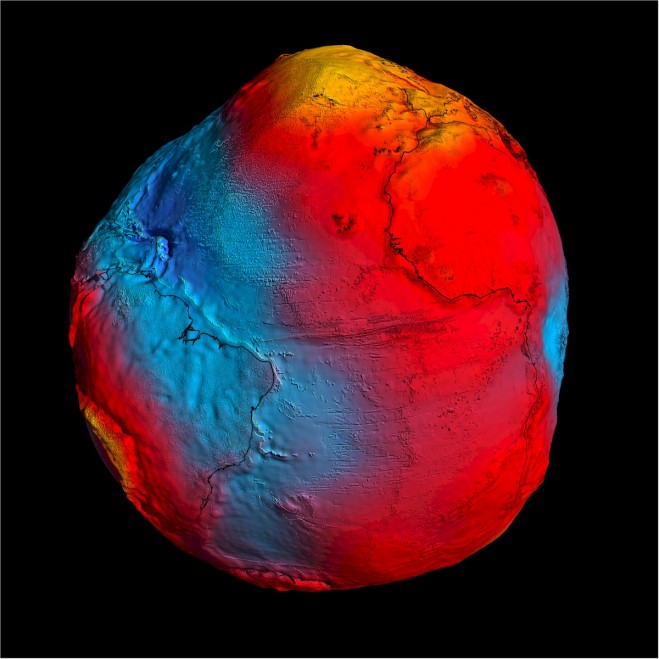 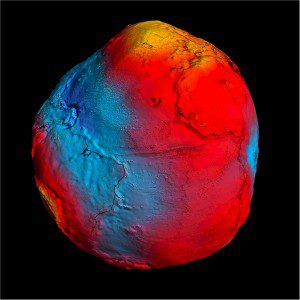 ESA's GOCE mission has delivered the most accurate model of Earth’s geoid ever produced. The colors in the image represent height deviations (–100 m to +100 m) from an ideal geoid. Blue represent lows values and reds/yellows represent high values.

The Gravity field and steady-state Ocean Circulation Explorer (GOCE) has been orbiting Earth since March 2009, reaching its ambitious objective to map our planet’s gravity with unrivalled precision.

Although the planned mission has been completed, the fuel consumption was much lower than anticipated because of the low solar activity over the last two years. This has enabled the European Space Agency (ESA) to extend GOCE’s life, improving the quality of the gravity model.

To be able to measure the strength of Earth’s gravity, the satellite was flying in an extraordinarily low orbit about 255 km high—about 500 km lower than most Earth observation satellites. Based on a clear preference from the GOCE user community,ESA’s Earth Scientific Advisory Committee recommended lowering the orbit to 235 km.

Lowering the orbit increases the accuracy and resolution of GOCE’s measurements, improving our view of smaller ocean dynamics such as eddy currents. The control team began the process in August 2012, lowering GOCE by about 300 meters per day.

The first “geoid” based on GOCE’s gravity measurements was unveiled in June 2010, illustrating the surface of an ideal global ocean in the absence of tides and currents, shaped only by gravity. A precise model of the geoid is crucial for deriving accurate measurements of ocean circulation, sea-level change and terrestrial ice dynamics.

The geoid also is used as a reference surface from which to map the planet’s topographical features. In addition, a better understanding of variations in the gravity field will lead to a deeper understanding of Earth’s interior, such as the physics and dynamics associated with volcanic activity and earthquakes.