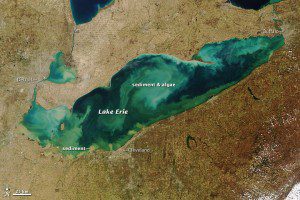 NASA's Terra satellite captured this natural-color image of Lake Erie on March 21, 2012. Muddy, tan-colored water along the shoreline reveals sediment that has washed out of the rivers and streams that feed the lake. Milky green, light blue and white shades may also be sediment-rich waters. As the shallowest of the Great Lakes, Erie's bottom can be stirred up by strong spring winds and the currents they generate.

The lake bottom is rich in quartz sand and silt, as well as calcium carbonate (chalk) from limestone. Warm temperatures this winter meant more rainfall than snow, as well as more immediate runoff from streams. River flow with sediment was much higher than average for much of the winter, according to NOAA oceanographer Richard Stumpf.