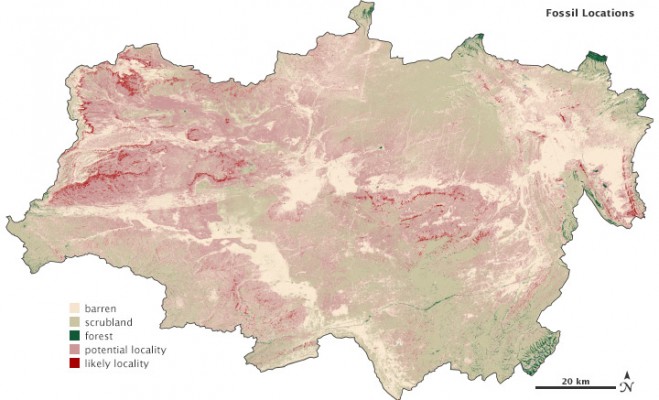 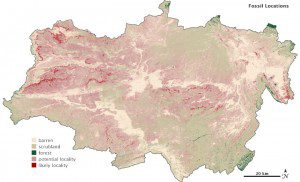 Satellite images can help researchers focus on the best fossil sites, which are on steep slopes where erosion exposes multiple layers of rock.

In May and June 2012, Robert Anemone was doing what he usually does in early summer. The professor from Western Michigan University was preparing to spend several weeks working outdoors in Wyoming, digging for fossils in the Great Divide Basin.

To improve his odds, Anemone turned to Charles “Jay” Emerson, a geography professor who is also based at Western Michigan University. Emerson specializes in interpreting satellite images, including those from ETM+.

Anemone and Emerson aren’t the first scientists to turn to remote sensing for fossil hunting. One of their colleagues at the Denver Museum of Nature and Science, Richard Stucky, started working with NASA to explore Landsat’s potential in the mid-1980s. Stucky and colleagues produced a series of “false-terrain” images designed to show contrast among different rock types.

In the years since Stucky first explored Landsat’s potential, new computer processing techniques have added to the paleontologist’s toolbox. As Anemone and Emerson examine the Great Divide Basin, they don’t just look at a few satellite images. They have taught their computers to analyze hundreds of images.